Music is art. Right? So, I’d like to think that my decision as a young lad to take up an instrument was born in a desire to make the world a better place by seasoning it with my music. But, to be perfectly honest, there was no altruism at work. Nope. I just thought the sounds on my Dad’s album of Revolutionary War fife and drum tunes were really cool. So, when “the music man” (Mr. Bestman) came to my school and pitched the idea of playing an instrument, I wanted to play the drums. 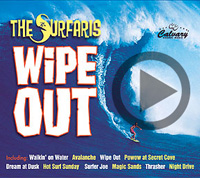 But, alas, it was 1967, the year of the smash hit Wipe Out, and every boy wanted to play the drums. (The link to the left is only for the benefit of those who are not my peers.) As a result, the quota on drum players had already been satisfied by the time I got to the clipboarded signup sheet. Disappointed, I asked, “Can I play a fife?” Says the Music Man, “Well, no. But the next best thing is this.” And he held up a shiny, silver tube with lots of scary buttons and holes. “How ’bout a flute?”

I wasn’t sure about this, but I swallowed my disappointment at not being able to knock out the rowdy rhythms of rock’n and roll’n California surfers and began the rocky start of the only boy flute player that I knew in a 3000-mile radius of my home in DesPlaines Illinois.

Truncating the story by a couple of years and going right for the most important part, and that which propelled me into grade school stardom, my private flute teacher taught me how to sing on the flute with…VIBRATO. With that ability I warbled my way into good standing with the band director, Mr. Galvin who asked me to solo with the school band, playing Flute Royale. Now, mind ye well young men. I also rose on the popularity charts among the girls for being the sensitive and artistic alpha male. “The flute is a girl instrument, isn’t it?” Not in my book, mate. The flute is the instrument of some of the coolest cats in the artistic world: Jean Pierre Rampal, Sir James Galway, Herbie Mann, Matt Molloy, Ian Anderson, Matt Eakle, Bob McBirnie and the list goes on.

I enjoyed crushing the competition and winding up First Chair. Before finishing High School I played in the Youth Symphony of Greater Chicago (now CYSO) and taught the flute to about 20 students in the local school system. (Below: Here I am with one of my students way back in 1974.) 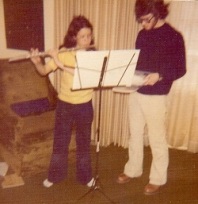 Following graduation I started a college career in performance on flute at Roosevelt University in the Chicago Musical College, living and breathing music for 2 years in the heart of the city. This time served well in helping me sort out my future which included playing with a number of Chicagoland ensembles like The Harwood Early Music Ensemble, The Skokie Valley Symphony, The Chicago Symphonic Wind Ensemble, The Wheaton Municipal Band, and other small ensembles of my own creation such as a flute choir called Spirit Winds. 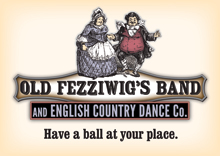 Through the years I learned how to play for pure enjoyment, (while making a living in another creative endeavor), which has lead me down a number of paths playing in hundreds of settings with a variety of musicians. Today I find my greatest pleasure in jamming with my own English country dance band, Old Fezziwig’s Band, as we play for traditional English, Welsh, and Scottish dance events.

Lessons are given from my home studio at 517 Church Street in Batavia. Click the map above for Google directions.